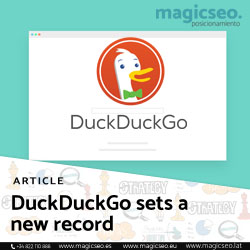 DuckDuckGo continues to maintain its steady growth, reaching 100 million searches per day for the first time

DuckDuckGo celebrated this milestone because it reached 100 million searches in one day. DuckDuckGo’s public traffic data shows that the record was hit on January 11th. For comparison, DuckDuckGo’s average daily search volume in January 2020 is about 52 million. This means that this past month’s figures have increased by 73% year-on-year.

To further illustrate this record increase, here is the year-on-year increase in average daily search volume:

DuckDuckGo’s growth is not limited to web searches, as its mobile apps are more popular than ever. In the past weeks, it ranked seventh in the iOS App Store chart of all free apps and first among all utility apps. DuckDuckGo’s success in the mobile field has propelled it to the number 2 position behind Google, usurping Bing and Yahoo.

That’s right, DuckDuckGo has officially become the second largest search engine on mobile devices in the United States. On the desktop, it lags Bing and Yahoo at #4. However, as more searches are performed on mobile devices, there is less and less room for search engines to grow on desktops.

No matter which way you choose to view, DuckDuckGo is experiencing a growth rate not seen in its 12-year history. There are indications that this is part of the shift to private platforms. The main selling point of DuckDuckGo compared to other search engines is its privacy function. Users can search without collecting their personal information and selling it to advertisers.

Recent events have promoted the adoption of privacy-based applications. As DuckDuckGo’s ranking in the App Store rises, encrypted messaging applications such as Signal and Telegram also rise. As people become aware of how companies use their data, they seem to be making smart decisions to choose different services. Alternative search engines, social media applications and messaging applications are all increasing. Over time, we will discover whether this growth is sustainable. Users may get a higher level of satisfaction in the services they were initially using.

Now is the perfect time for DuckDuckGo to invest in more features to bring it closer to a true 1:1 alternative to other search engines. We will see if the increase in daily search volume will spark some updates in the near future.